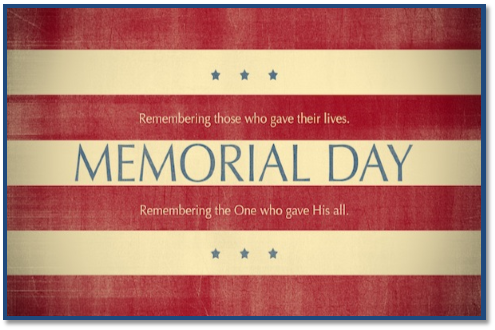 As Memorial Day approaches, I am looking forward to a pool party with my family at my son’s house. My husband and I are providing the Boston Butt, country ribs, and hamburger patties. But two of my sons and my daughter-in-law, who are excellent cooks, will grill and barbeque the meat and make the sides. All I must do is show up, enjoy eating good food, and swim with my three grandchildren. Yay!

The past few days, I’ve been reflecting on the reason we celebrate . . . or are supposed to celebrate . . . Memorial Day. It’s not about cookouts and family time and fun, although I enjoy those things.

Decoration Day began shortly after the Civil War when communities would gather to decorate the graves of soldiers killed in the War Between the States. It was established as a federal holiday, called Memorial Day, in 1971 as a day set aside to remember our fallen soldiers in all the wars we have fought.

My dad was 18 when he was inducted into the Marine Corps in 1944 to serve in the South Pacific during World War II. After two years, he enlisted in the Army Air Corp, which later became the Air Force. He made the Air Force his career, serving in Nagasaki, Japan, shortly after the bomb was dropped in WWII. He also served in the Korean War.

We were blessed that Dad didn’t lose his life in the two wars in which he served.

When I was a child, Dad served two tours in areas where we couldn’t go with him. So, I remember two separate years of my early childhood when my dad was gone, and Mom was alone to raise four little kids by herself.  A year in a child’s life is a long time, and I missed my daddy.  But we were blessed that Dad wasn’t in a war zone.  We knew he was safe.

I think of the thousands of children today whose fathers and mothers are serving in a war zone.

I think of those who have lost a parent to war.

I think of those parents who are left behind to raise their kids alone, some temporarily, some forever.

I thank God for the men and women who are willing to put their lives on the line for our freedom! I’m humbled by the many who have given their lives so selflessly. I pray that God will bless and comfort their families who are left behind.

While I am enjoying my time with family this coming Monday, I want to make sure my grandchildren know the reason behind Memorial Day. I want them to realize what a debt of gratitude we owe to all the soldiers who have served and died through the years to ensure and protect our freedom. And when my grandkids are grown, wouldn’t it be lovely if there were no war in which they might feel compelled to fight?